In this post I will show you how to update the bios on a Dell during OSD. I have created the following folder structure for the Dell bios updates:
SCCM_SHARE/Dell Bios Update/MODEL/BIOS_FILE

1. Download the bios you want to deploy from Dell support site. In this example the file is called “O7010A23.exe”

2. Create a SCCM package with the bios file that you downloaded in step 1.

3. Create a new group in your task sequence and call it “Bios Tasks Windows 10”. I create the group because I want only this step to run it is Windows that I deploy. I control that with a SCCM variable.

4. Create a new group under “Bios Tasks Windows 10” and call it “Dell” with the following condition (SELECT * FROM Win32_ComputerSystem WHERE Manufacturer LIKE “%Dell%”)

5. Create a new group under “Dell” and call it “OptiPlex 7010”, or the model you want to update, with the following condition (SELECT * FROM Win32_ComputerSystem WHERE Manufacturer LIKE “%OptiPlex 7010%”)

6. Add a Run Command Line step and call it “Bios Update A23 for Dell Optiplex 7010” with the following settings

b. Package = The SCCM package you created in step 2. 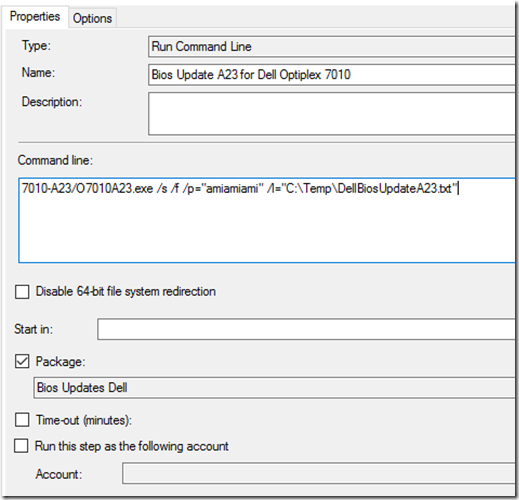 c. Add a condition for each older bios version. This will run the step is the bios version is one of them in the list. (Select * From Win32_BIOS WHERE SMBIOSBIOSVersion LIKE “%A01%”) 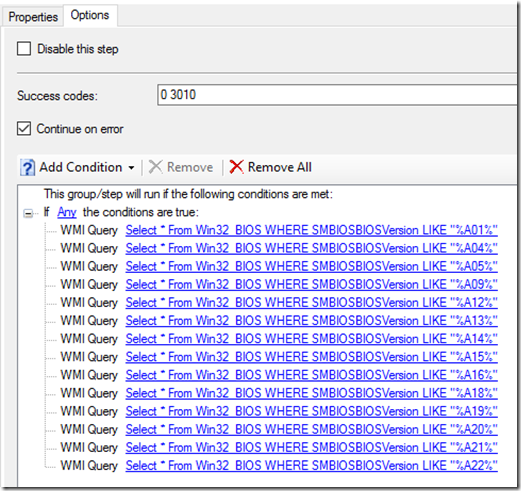 The step look like this in the task sequence:

My name is Claus Blaabjerg Hansen. I have been working with SCCM and client management / deployment since 2003.